For anyone feeling lost with the build up towards the Superbowl, let’s take a moment to break down the basics of American Football.

Not unlike basketball or soccer, the aim is to take the ball to the other side and repeat this process in order to score as many points as possible. Depending on the team’s strengths, they’ll try to A) run the ball or B) pass the ball. Once they make to the end of the field (known as the end zone), that score is called a touchdown! Hurray 6 points!

After scoring a touchdown, the team can try to run one more play (the options are to run or pass again), but they’ll most likely kick the ball. A successful kick between the goal posts gives 1 point. Trying to do another play is the riskier move– because although it can give 2 points, an unsuccessful play will give you nothing. Most teams would rather have the hard work of their touchdown give them a total of 7 points instead of 6.

Now that you understand the mechanics of scoring, the other aspect you should learn about are “downs“. You should think of “downs” like chances. When a team has possession of the ball, they’re on the offensive. They’ll have four chances to get the ball to the other side of the field for a touchdown.

Even for the best teams out there, it’s very difficult to make it down the field in four chances. So the plan of attack for offense is to keep pushing forward far enough along the field in order to reach the “first down” mark. 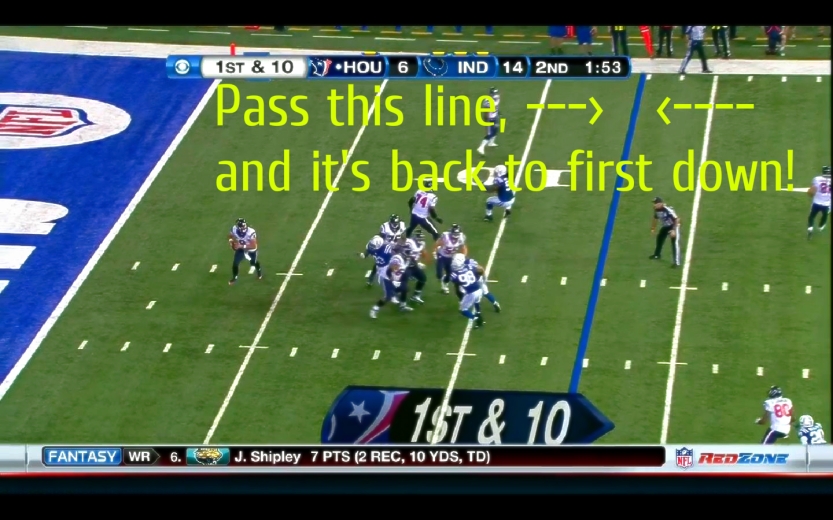 If they can pass that line, they’ll reset their chances back to one. However, if they fail to reach that mark in their 4 chances, they’ll have to give the ball to the other team. When it gets to the fourth down, things can get really intense! If the team doesn’t feel confident enough about reaching a first down, they’ll probably kick the ball. This is so that when they give the ball to the other team, that team has to start further down the field. Also, if the offense is close enough to the end zone and decide to kick, they have the opportunity to kick a field goal, which will give them 3 points.

Of course, there’s a lot more strategy that we could delve into, but focus on understanding these basics first. Your enjoyment of watching the game will definitely increase!